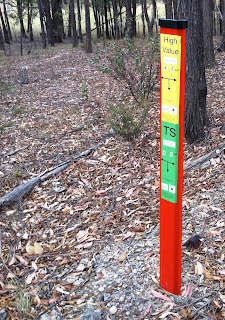 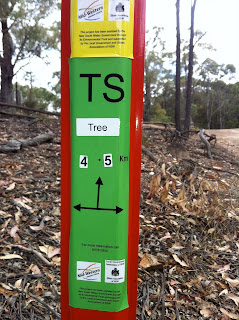 The strategy includes a survey of the various threatened plant species that exist within our roadside corridors and within our particular area are some of the highest value corridors in the entire Shire.
A green sticker on a marker indicates a threatened species nearby, such as a Capertee Stringybark or Ausfeld’s wattle. A yellow sticker marks a high value area such as a Box-gum woodland Edangered Ecological Community containing White Box or Yellow Box or Blakely’s Red Gum trees.
Council hopes that these markers may help property owners better appreciate and take a more active interest in caring for roadsides when they know that they are of high conservation significance. You can find out more about each of these species from the NSW Environment and Heritage website http://www.environment.nsw.gov.au/threatenedspecies/


"The [Mining] act is crook and it needs fixing" says Craig Shaw, Bylong Valley farmer and Secretary of the Bylong Valley Protection Alliance. For more info read this article by the ABC.

For an update on where landowners stand in relation to access agreements, check out this article in last week's edition of The Land on our friend Craig Shaw and his dealings with the mining companies who want to take coal from his prime farm land.

Reports: Operations Report: Presented by NL. Environmental Update: Presented by MG. General Business: General discussion on lime factory and noise by NW and BC. EM asked about Inglenook exploration and closing of Charbon operation.
JA tabled an email complaint from NS received on behalf of non-resident landholders.
MG to follow up. Meeting Closed: 11:35am Next meeting: September 9 2013.
Posted by RSWUA at 09:52 1 comment:

In case you missed it, here is an interesting media release from the office of Lithgow City Councillor Martin Ticehurst.
18.3.2013


At last night’s Ordinary Meeting of the Lithgow City Council held in the Crystal Theatre at Portland, the Mayor Councillor Maree Statham in reply to an innocuous question from the Public Gallery, confirmed that a brother of hers was employed by Coalpac, the company of a controversial proposed mining Consolidation Project at Cullen Bullen near Lithgow.

Notwithstanding this, Councillor Statham publicly denied that that she held any conflict of interests over her recent involvement on the Coalpac Consolidation Project, which is currently now under further consideration by a second Planning Assessment Panel after being initially refused approval.

Fellow Lithgow City Councillor, Martin Ticehurst said, “I’m very surprised at this news from the Mayor.  This is the first time I’ve heard about it and I’m sure that many of the people involved in this highly contentious planning issue in Cullen Bullen had not heard of this new declaration by the Mayor before.  I believe that question and the Mayor’s response at the Council Meeting also caught many of those present, including the lady in the public gallery who asked the question by surprise.

The last time this matter came before the Lithgow Council for debate recently on the 4 February 2013, the Council Minutes confirmed that the Mayor made no mention whatsoever of this new declaration she made last night, nor that she made or recorded any Declaration of Interest on the Agenda Item for the Coalpac Consolidation Project?”

Councillor Ticehurst said, “Mayor Statham needs to now come clean on the public record and reaffirm what if any significant or insignificant conflicts of interest, either pecuniary or non-pecuniary, she may have on the controversial Coalpac Consolidation Project at Cullen Bullen?

The Inglenook Community Consultative Committee met on the 19.3.13 and our Association's committee member Prudence Woods was there to file this report.

Meeting commenced at 9:31 am
Summary of Meeting
Alex Brown has replaced John Sandona (new project manager).
Steve Bracken is the Chief Operating Officer.
Due to the current price of coal there is a downturn in the coal industry.
Airly Mine is currently in ‘care and maintenance’. There have been redundancies and budget cuts.
There have also been budget cuts to the Inglenook Project. For 2013 the project has been ‘slowed down but not stopped’. The Spring Park Office will be used for meetings. Alanna and Tom will be based at Airly. Ph 63588340 for Spring Park.
There is now one drilling rig across all Centennial Coal western projects. The drilling rig is at Charbon Mine, next move uncertain as Centennial is waiting for approval/access from other landholders. They have drilled 15 sites out of a planned 28. Depending on access/approval from landholders 3 holes may be drilled in 2013.
A Community Member asked Centennial why the drilling rig had gone back to one particular landholder’s place after it had been there at an earlier time. Reason for this not specifically identified.
Another Community Member asked if Airly Mine will reopen. Possibly, as a Mining Methods option. A washery is included in the application. The washery from Charbon would not be moved to Airly.
An update for the general community will be in The Mudgee Guardian.
Centennial are continuing to collect environmental baseline information – surface water, ground water, vegetation mapping, meteorological station. Winery property – meteorological station. The ground water samples will be collected for up to another 2 years. It was suggested that this needs to continue, eg in a dry year. A community member stated that they felt that the water study was not representative of the entire area. Alanna responded that this was hard to do when they don’t have access to properties. The same community member revealed that they had not been paid for the initial water study.
Environmental monitoring will not be affected by budget costs.
Shown a map where the drill holes are. At the next meeting there will be a map to show where the proposed drill holes will be.
A Community Member asked if Xstrata was selling its interest. Not known. Alex responded that it would be easier if one company held the one resource.
Additional Drill Mud – Rods were stuck in some of the holes so Superfoam was used to help free the encased drill rods. The mud lubricates the rods to allow them to be released.
MSDS: Minimum/Nil
It is not used all of the time. A Community Member wanted to know the chemical composition. Information not available at this time.
Incident – Collection of surface water sample from property without providing notice to the landholder. Response – Landholder notified as soon as possible. Centennial Coal internal incident investigation completed.
Incident – Drill site encroached past the demarked area (went next door, no fence line). The drill hole was not on the wrong place. Response – Discussion with landholder. Centennial internal investigation in progress.
Contractor issues.
Coal has dropped about $30 per tonne. About $80 a tonne.
A Community Member asked what will happen to the railway once Charbon has closed? Unsure.
Jolieske’s Questions
1.     Have they stopped drilling for the time being? Previously answered. Have heard the drilling rig is going to Bylong? No connection to Bylong.
2.     If so, when do they envisage starting again and how many holes have they dug so far? Previously answered.
3.     Apparently there was some water testing done a couple of weeks ago. How many sites are they testing, and how often? About 6 sites, summary at next meeting.
4.     When are the gauging stations going in? Apparently they are putting in 3 stations. Going through approval process. Hopefully next 3 months.
5.     Have they had results back yet from the helicopter survey done a number of months ago and will Centennial give a report back to the Community on this? The helicopter around at the moment is not Centennial. Not sure if the results for Centennial’s survey have already been provided.
Next Meeting proposed: Tuesday 23rd July 2013 at 9:30am.
Meeting Closed: 10:35am

For more information on the Inglenook Project visit: http://centennialcoal.com.au/Operations/Projects/Inglenook.aspx
Posted by RSWUA at 08:18 No comments: