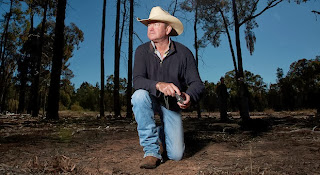 Alarm bells are sounding over further coal seam gas drilling in northern NSW’s vast Pilliga State Forest: dead animals and a toxic chain of ponds, along with the release this week of a damning ecological report.
“I call this one ‘roo stew’,” says Tony Pickard, a semi-retired grazier who lives near the Pilliga, a vast inland forest in northwestern New South Wales. Pickard is referring to a photograph taken in August 2009 of a dead animal immersed in filthy, brackish fluid. Tufts of grey fur protrude from the liquid, but the animal is so decayed — almost dissolved — that it’s difficult to identify whether it is indeed a kangaroo, or some other type of carcass.
For the past four years, Pickard has scouted the forest, a ladder tucked under one arm, and a camera slung over the other. He’s captured images of a turtle, a goanna, and a dozen frogs, all floating dead in the cloudy ponds or wells that litter this coal seam gas (CSG) drilling site.
All this in a "Noah's Ark" for declining bird and mammal specials, as an ecological study released this week called the Pilliga forest.
In recent months, the state government has taken concrete steps to help CSG drilling expand. On September 11, NSW lifted its moratorium on fracking, a controversial method of extracting coal seam gas. The state has granted several new exploration licences and it has renewed others — including the licence that was granted over the Pilliga. And in early October, the NSW Resources and Energy Minister, Chris Hartcher, told a coal seam gas industry conference that he wanted to ramp up CSG production in NSW.